Meet the 2021 3M Half Marathon Ambassadors Katrina (goes by Kat) loves to run, cycle, and rock climb. Her favorite thing to do is to combine vacations with running race events and enjoying the outdoors. Because of this, she started working towards a goal to do a marathon in each of the 50 states and has completed 9 states so far. She has participated in the 3M Half Marathon four years in a row and continues to tell everyone that it’s her favorite half marathon and one of the few races she has repeated!  You can follow Kat’s adventures at @katruns26.2 on Instagram. David joined Austin Front Runners in 2018 to make new friends in the community and to become physically active. He was new to running and never thought of himself as an athlete. David was initially very intimidated by long distances and convinced himself early on that he could never run that. However, he has learned two big lessons after joining AFR and the larger community of runners. The first one is that the only person he competes with is himself, and the second one is that success is not measured by one run on any given day, but by the progress made over the course of time.

After some time, hard work, and encouragement from the club, his family and friends he ran his first half marathon ever,  3M Half Marathon, in January 2020!  David is looking forward to seeing what progress he’ll make improving his time for the 2021 3M Half Marathon and is planning to complete his first marathon next year. When David is no running, he enjoys eating out, hanging out by the water, and seeing friends. Rachel is 23 and loves being active. She has run countless 5Ks and 10Ks and two half marathons. When Rachel is not running along Lady Bird Lake, she’s either kickboxing or looking for the best vanilla latte and breakfast taco.

Rachel was born and raised in Boston (go Patriots!), attended the University of Florida (go Gators!), and now lives in Austin where she works for SXSW. Rachel is so excited to represent the 3M Half Marathon and run the streets of Austin! Roberto is originally from Guadalajara Jalisco, Mexico. He’s been living in Austin for about two years and works at Apple. Roberto has always loved running, but never in his wildest dreams did he imagine he would be running for a medal. He was first introduced to races by his girlfriend Alma, who has “a million medals”.

His first race was a 5K ad he’s been hooked ever since. Running has given Roberto the motivation to push himself to higher levels, and thanks to running he’s met some amazing and positive people that have helped him get where he is now. Roberto ran the 3M Half Marathon for the first time in 2020, achieving a big PR and running in one hour and 48 minutes. 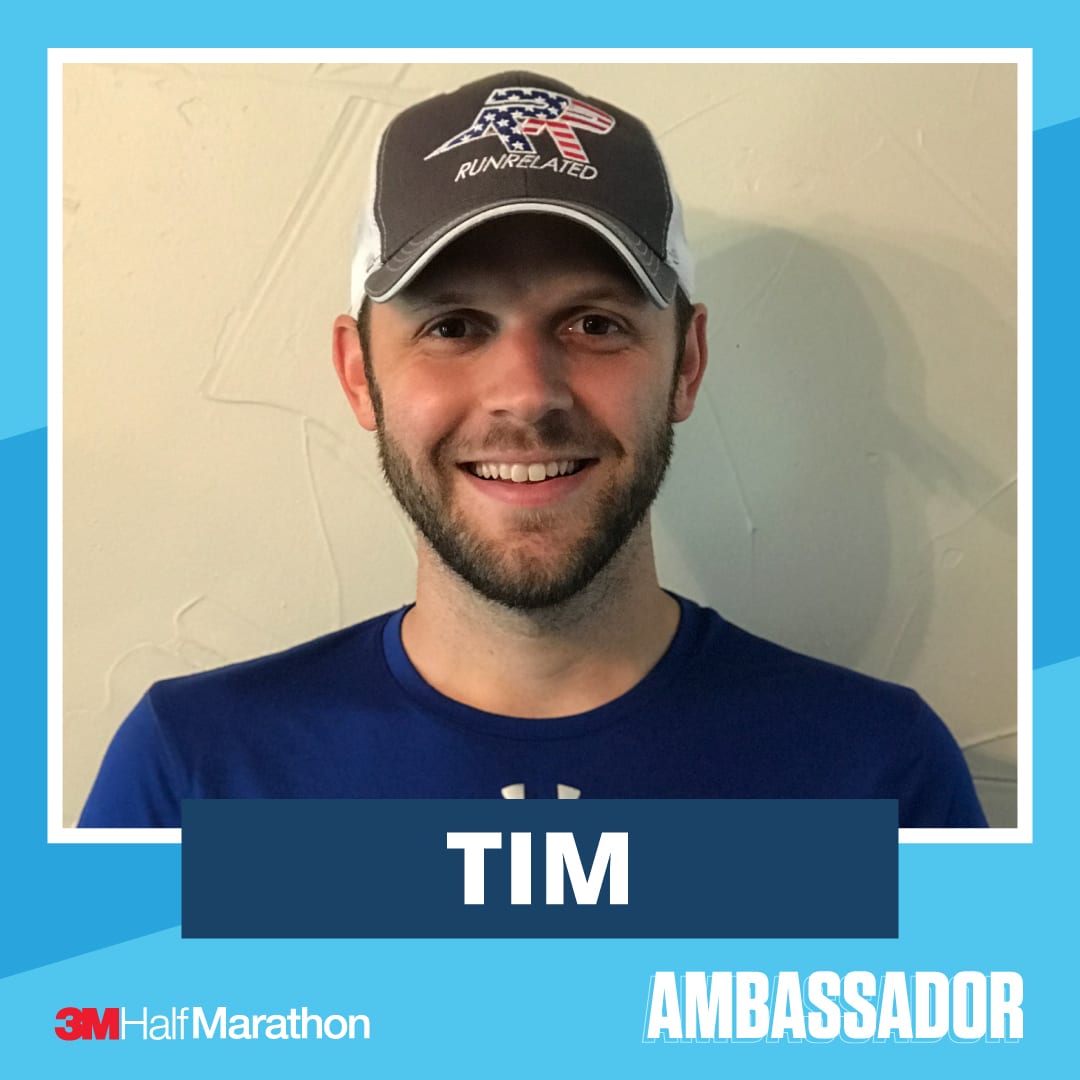 Tim is a husband, father of three, Family Nurse Practitioner, and owner of RunRelated. He has been running and racing triathlon more competitively for about five years now and It all started with 3M Half Marathon.

His goal in 2015 was to break 2 hours, which he barely missed. He came back in 2020 and broke the 1:30 barrier- A 30+ minute PR! 3M Half Marathon introduced him to his love of running and he recommends it to anyone chasing a PR or wanting to do their first half marathon! Tricia lives near Austin, TX and in 2021 she will be running her third 3M Half Marathon. She has been running for 10 years and she loves it, even when she hates it because it is hard, fun, challenging, and therapeutic.

The great course support is her favorite part of 3M Half Marathon. Tricia loves that “even when you feel like you want to give up, someone is yelling for you to keep pushing! It’s great – the most fun you’ll have with a few thousand of your closest friends!”. Kristen began her running career only 3 years ago after deciding to take charge of her life and making positive changes.  She ran her first half marathon at the 3M Half Marathon in 2018 and has yet to look back- let alone slow down.  Now 75 pounds lighter, she’s added a full marathon to her list of accomplishments after completing the Walt Disney World Marathon in January of 2020.

Kristen is passionate about running, vlogging (you can find her on her channel “RunningInMakeup” on YouTube) encouraging others, and being the best and healthiest mom she can be. Nina lives in Plano, TX and started running three years ago, to be “barely” able to finish a 5K. She works in a dental office, and along with her coworkers, they all ran a local race as a team-building experience. After that, Nina started running with a group of friends once a week, when one of her friends suggested that they should all run the 3M Half Marathon together. Nina agreed, thinking that it would actually never happen. After all, she “wasn’t a runner”.

That changed when in 2019, she ran her very first half marathon: 3M Half Marathon! Nina is now a pace leader with the Dallas Running Club, and she helps people just like her accomplish running goals they never dreamed possible! Her one suggestion is to come run 3M Half Marathon with her because “it will change your life”! Toya’s running journey started back in 2015 and she has been loving it ever since! In October of 2017, Toya was diagnosed with Triple Negative Breast Cancer, which caused everything in her life to come to an abrupt stop, including her love of running. Even though her oncologist recommended her not to run during chemotherapy, she kept walking and jogging, and she accredits her stubbornness to be what helped her get through chemotherapy.

Thankfully, Toya has been Cancer free since January 2019, and she is determined to live her best life and what she loves: Run! Toya likes the amazing energy surrounding 3M Half Marathon. “Everything from the people, volunteers, vendors EVERYTHING! Not to mention the course! I mean, who doesn’t love a downhill course! Let’s not forget the bling! O.M.G! The bling is SUPER cute! 3M never disappoints with the bling!” Scott has been running on and off for over 30 years. Running mostly shorter events, it wasn’t until 2016 that he decided to tackle his first half marathon and successfully completed the 3M Half Marathon. “I was happy running 5Ks and 10Ks and really never considered running in a longer race.

The great thing about the 3M Half is the significant net downhill during the event. It was the perfect race for a first-time half runner. ”Scott lives in Georgetown, Texas, and volunteers with the Georgetown Running Club (GRC) which holds 17 races each year. Airon is a native Austinite and avid endurance athlete. She is a Program Analyst and a Run Lead at Life Time Downtown and South Austin locations. She is also a certified RRCA running coach, and participates in various running, biking, and triathlon events. Sara is originally from Chicago and has been a pacer for the Chicago Marathon for 15 years. She has run an impressive 51 marathons and several trail runs over 50 miles. Sara has also had the honor to be a guide for a visually impaired runner for Team With A Vision.

To add to her impressive resume, she continues to guide visually impaired runners in local race, was a pacer for the 2020 Austin Marathon and is a volunteer pacer for the ATX Runners Club.